Fiona Gibson started working on magazines at 17 years old when she landed a job on Jackie. She has edited more! and Just Seventeen, writes for Sainsbury’s magazine and the Telegraph, and is the author of ten romantic comedy novels.

Fiona has twin sons who have flown the nest, and lives in Glasgow with her husband Jimmy, their daughter Erin and rescue collie cross, Jack.  As well as writing, Fiona loves to run, draw, cook and is a recent convert to the joy of yoga.

How did you end up doing the job you do?

Even since I was a Jackie reader, I have always been obsessed with magazines. One day, when I was around 15, I was lying on the living room rug reading my mag and said to my Dad, ‘I want to work on Jackie.’  Dad’s great – he’d worked for a magazine himself (Architect’s Journal) and knew that Jackie was published by DT Thomson in Dundee. He was totally encouraging. I started firing off comic strips and jokes to various DC Thomson comics – which they paid me a fiver a time for – and when I’d finally finished school, I applied for a job at Jackie.

I worked on various magazines throughout my twenties – after Jackie I went to Just Seventeen, then more! – but when I had my twin boys at 32 I decided to go freelance and have a stab at writing a novel. I was still writing features for magazines by day so I had to write the book at night. The way I looked at it, I was chronically sleep deprived and looked terrible anyway – so it didn’t really make much difference! An agent who’d spotted my features in Red magazine asked if she could represent me.

What are you working on right now?

I am at the very best part – starting a brand new novel. I write two a year, for Avon (a division of Harper Collins) which is quite a stretch and means there’s not much of a break between finishing one and starting the next. But that’s okay – after a few days I’m usually itching to get started on something new.

I was a junior writer on Jackie which involved writing bits and pieces – like the horoscopes (which I made up) and the multi-choice personality quizzes. To be honest, I couldn’t believe my luck. I’d left home and moved into a bedsit in Dundee and found myself working with a fantastic team of lovely people who were my age, or a tiny bit older. I never went to college or university. Jackie was my training for life and I loved every minute of my three years there. 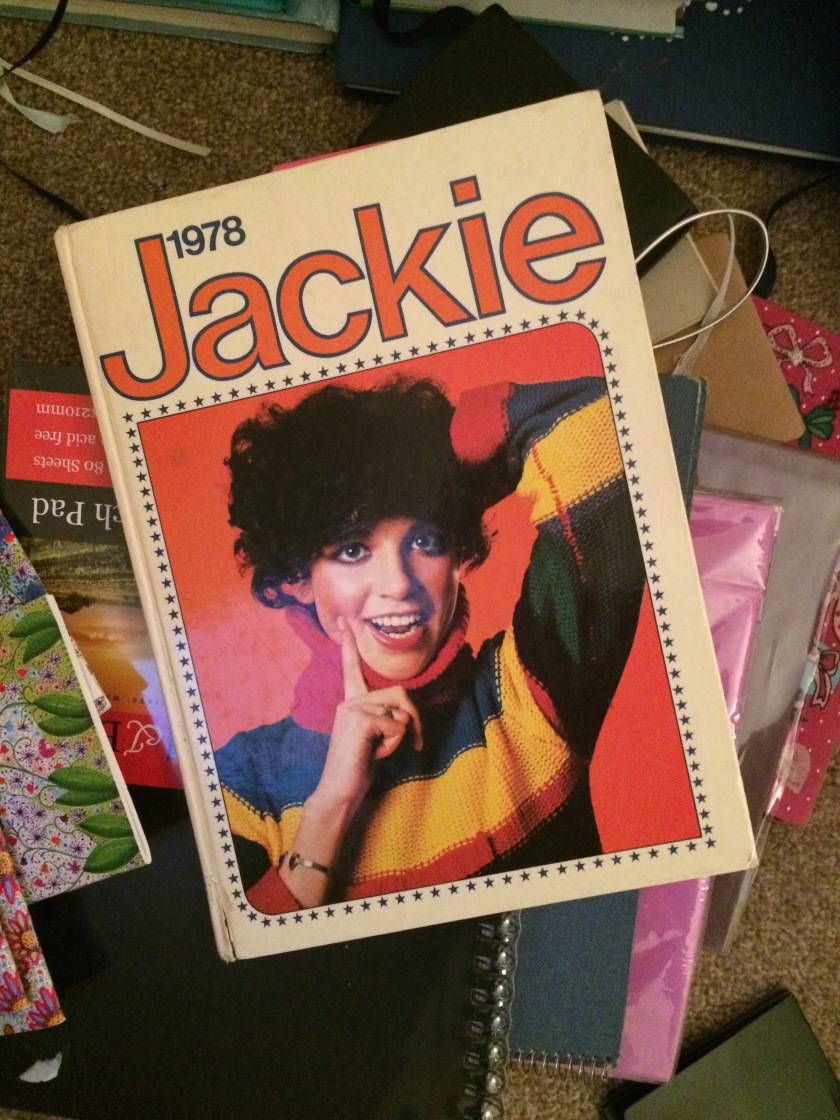 What was your B plan if this career didn’t work out?

I’d had notions of studying art – I have always loved illustration. But although I applied to art college, I didn’t get in. My portfolio just wasn’t good enough. Apart from that, I had no idea of anything else I wanted to do.

Where do you feel most inspired?

I work mostly in my workroom in our Glasgow flat. However I can get a bit cabin feverish and that’s when I take myself off to a cafe, which really helps. I like writing with lots of chatter – plus good music – in the background. I also love working on trains. Working at home can be a little dreary as I am, by nature, a pretty sociable type! And I do miss all the hi jinx and chatter of office life – although friends tell me there really isn’t time for those sort of capers any more.

What advice would you give your children?

Explore all sorts of things so you can discover the general areas of ‘stuff’ that inspire and appeal to you. For me, it was always writing and art – and I loved French at school too. From this, you’ll start to get a feel for what you might like to do in life. There’s terrible pressure to say, ‘I want to be a such-and-such’ at 14 years old, which is nonsense. There’s no need to decide on a specific career path so early. But it is important to be open to trying things so you discover where your passions might lie. I am very lucky in that I love my job and it doesn’t actually feel like work. I would love my sons and daughter to have this sort of life too.

What was the best piece of advice you ever received?

This came from Dad, who is still fighting fit at 81 years old and sailed from Scotland to Antigua after retirement! He said, ‘Do a bit extra, give a bit more than is expected of you.’ He said it would help me to stand out and get places. I am quite a grafter and so is Dad – he was a freelance architectural photographer and I saw the passion he had for his work. He didn’t mind working late down in his darkroom to get a job done, and he was often driving at breakneck speed to the post office in order to get a set of prints in the post on time. We are similar in that we are a little harum-scarum in our approach, but we both get the job done!

What are you most proud of?

I’ve loved working on magazines and I also love writing novels. Professionally, I guess it’s finding something I enjoy and making a living out of it since I left school 34 years ago, all through raising three children. Personally, it’s being Mum to my three lovely kids – Sam, Dex and Erin. I’m very proud of them all.

What has been your career highlight to date?

I have worked on some wonderful magazines but I have to say the highlight was editing more! at a time when it was flying off the shelves. At its peak – this was early 90s – we were selling half a million copies per issue. There was no competition as such and I had a brilliant team – features meetings were often held in a tawdry wine bar just off Leicester Square and would dissolve into hilarity and chaos. I came up with the idea of Position of the Fortnight – actually, it was semi-nicked from a feature She magazine used to run called ‘Function of the Month’, a kind of icky old sexual thing that we turned into something cheeky and fun. It was a unique and magical time and, happily – thanks to Facebook – many of my workmates from those heady days are still in my life now.

What’s the biggest challenge you face in your day to day?

Keeping my mind on the job and not allowing distractions to lure me off track. Generally, I can focus pretty well, but writing the middle section of a book is definitely not easy. It can feel like wading through concrete sometimes. I just have to keep going, battering onwards, then something clicks and writing the last few chapters is heaven. But I’d never say that writing 100,000 words of engaging prose is easy!

Watching: Homeland.  My husband Jimmy and I are addicted

Reading: Moranifesto by Caitlin Moran – I just love her

Pass it on:
Who would you most like to see featured on this blog?

Sarra Manning is a fantastically funny woman and a brilliant author of both adult and YA fiction. We worked together on Just Seventeen and she’s a marvel!
Twitter: @sarramanning

Cathy Cassidy is a hugely successful children’s author and one of my oldest and closest friends. We met at Jackie magazine in the mid-80s and get to the point when we need to see each other.
Instagram: @cathycassidy
Twitter: @cathycassidyxx

Fiona latest novel, The Woman Who Upped and Left was published earlier this year. 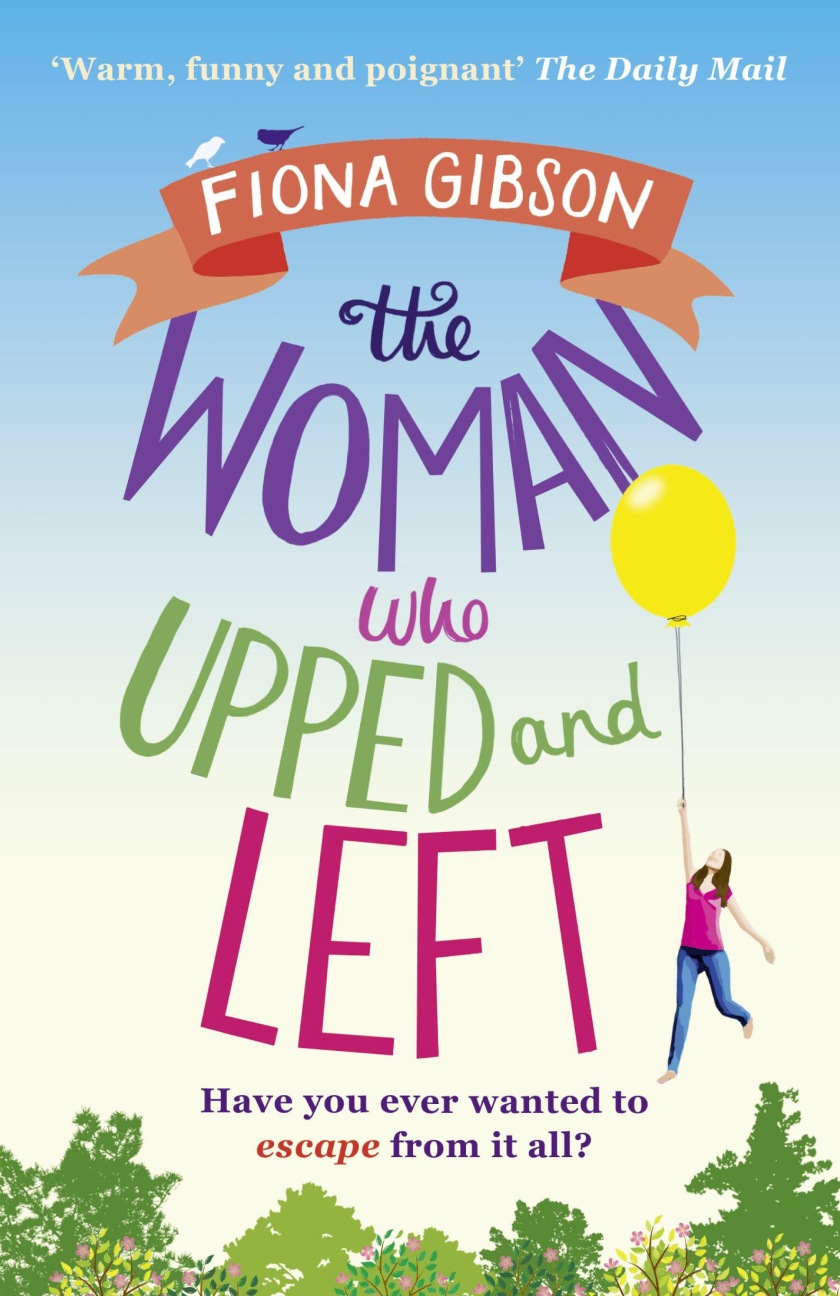 One thought on “In Conversation With… Fiona Gibson”

BOSSING IT . We were In Conversation With... Steph Douglas last week who chatted to us about launching @dontbuyherflowers and the impact that running her business has on family life. You can check out our interview via the link in the bio. 💫 We ask all our guests to nominate future contributors for the Muse in a feature called Pass It On and Steph’s are: Laura @themodernnursery Emma @homemilk . Do get in touch if you’d like be featured on The Muse! 💫
IN CONVERSATION WITH... . Rounding out International Women’s Day by publishing an interview with a woman I’ve admired for yonks 🙌🏼 . Steph Douglas dreamt up @dontbuyherflowers whilst on maternity leave, having spotted a sizeable gap in the gifting market. . Six years later Steph now oversees an incredibly unique and successful business. Follow the link in the bio where Steph tells us what she’s learnt along the way and how she juggles all things family and career. . Thanks so much @steph_dontbuyherflowers for joining us xx
LIFE AFTER DEATH . Have you read Abbey’s post yet on The Muse? Her incredible story of cancer misdiagnosis is like nothing else I’ve read. . A masterclass in priority and humility, Abbey’s experience has left such an impact on everyone who knows her. . We ask our Muse contributors to Pass It On to women they’d like to see featured on the blog. Abbey’s recommendations are: “Marnie Baxter– My friend Marnie is an actress and her first short film, Bad Mother, that she co-wrote and directed, did really well last year winning several awards. Instagram: @eidlass78 Fi Munro – Fi, whose blog is included in my list above, is incredible. She’s living with ovarian cancer and has written books including How Long Have I Got? Her motto is ‘live like you are dying’ which, in her words means: ‘Embrace today. Live for the moment. Stop worrying about the future. Focus on today. Laugh more. Take the risks. Follow your dreams. Be unashamedly you. Make the day good.’ She’s fierce, funny, truly inspirational and says fuck plenty.” . Thanks again for joining us Abbey xxx
IN HER WORDS... LIFE AFTER DEATH . Abbey Craig wrote a piece for The Muse in 2017 following a diagnosis of terminal cancer. It was the most widely read and shared piece we’ve published to date. A year later Abbey contacted me with the incredible news that her terminal cancer diagnosis was in fact a misdiagnosis. . In this new post, Abbey reflects on the period during her misdiagnosis when her family’s world was flipped upside down and on how she lives now. . This is an unforgettable 15 minute read, packed full of searingly honest insights and written with razor sharp clarity. Abbey’s story will stay with me for a very long time and I’m so grateful she shared it with us. . Link in bio ☝🏼 Thank you Abbey x
PERFECTLY FORMED . Kym and Jade joined us recently to talk about the unusual shape of their family and how it works for them. (Link in the bio ☝🏼) . We also asked them to recommend some women for our #passiton feature and they have suggested: Caprice Fox @the.fox.family Bee Adamic – @mamabossgirl Kira – @kirasocialldn We’d love to talk to talk to you about the Muse - do get in touch if you’d like to write a piece for us 🖤 . Thanks again to Kym and Jade for your piece, it’s a brilliant read xx
IN CONVERSATION WITH.... . Kym and Jade talk to us about their perfectly unconventional family. . Follow the link in the bio to read about their experience of parenting as a same sex couple. Such an insightful read and a warm reminder of the familiar experience of parenting, whatever shape your family happens to take. Thank you for sharing your story @amumcalledmama